Short for AT by Abbreviationfinder, Austria is a parliamentary republic and a federal state with nine states. The president has traditionally held a ceremonial role while the government has the executive power. The voting age for national elections is only 16 years. The country has a long tradition of co-governments between the Conservative People’s Party (ÖVP) and the Social Democrats (SPÖ).

The president is elected in general elections every six years and may be re-elected once. A second ballot is held if no candidate receives at least half of the votes in the first round. On paper, the head of state can dismiss the government and dissolve parliament. The President appoints the Head of Government, the Chancellor, and on his proposal other Ministers. In practice, the government has the executive power.

The Federal Council has 61 members elected indirectly by the state parliaments – between 3 and 12 members per state, depending on the population. The Federal Council represents the interests of the Länder against the federal power. It may delay legislative proposals that have been approved by the National Council but do not have any veto rights. Members have a term of five or six years and are gradually replaced after elections in the states.

Austria was the first country in the EU in 2007 to lower the voting age from 18 to 16 years. At the same time, the National Council’s term of office was extended from four to five years.

Major changes in the constitution must be submitted to decisive referendums. The same applies to minor constitutional amendments if at least a third of the National Council so requires.

The nine states (federal states) – Burgenland, Carinthia, Lower Austria, Upper Austria, Salzburg, Styria, Tyrol (Tirol), Vorarlberg and Vienna – have far-reaching autonomy with their own elected parliaments and governments. The regional governments are led by a head of state or head of state (head of state) appointed by the state parliament. The states are in turn divided into districts and municipalities.

The judicial system is divided into local courts, state and district courts and four higher state courts. The Supreme Court, the Constitutional Court and an Administrative Court constitute the highest level.

Two parties have dominated Austrian politics since the end of the Second World War: the bourgeois People’s Party (Österreichisches Volkspartei, ÖVP) and the Social Democrats (Sozialdemokratische Partei Österreichs, SPÖ, which until 1991 was called the Socialist Party). For a long time, they had the support of just over 80 percent of the electorate and for long periods have co-governed in so-called large coalitions. But support for the parties has plummeted in recent years.

The major downturn came in the 1990s, when the populist Freedom Party (Freiheitliche Partei Österreichs, FPÖ) on the far right side advanced. Former party leader Jörg Haider utilized immigration-critical sentiments and widespread politician disdain in society. In principle, the FPÖ became evenly matched with the ÖVP in the 1999 elections and the two parties then formed a bourgeois government.

During the reign, Haider and large parts of the party leadership broke out of the FPÖ and formed a new party, the Confederation of Austria’s Future (Bündnis Zukun Österreich, BZÖ), which took over the place as government party. Heinz-Christian Strache became the new leader of FPÖ. After the 2006 elections, both FPÖ and BZÖ ended up in opposition. When Haider later died in a car accident, his party lost voter support. In the 2013 election, BZÖ fell out of parliament at the same time as FPÖ again grew stronger. In the 2017 election, FPÖ made strong progress and subsequently formed a coalition government with ÖVP. However, the government was already divided after a year and a half since Heinz-Christian Strache was forced to resign as vice-chancellor due to a scandal (see Current policy). FPÖ was severely affected by the scandal and lost a full ten percentage points in the new election held in September 2019, while ÖVP strengthened its position in the National Council.

Team Stronach for Austria (Team Stronach for Austria) was formed in 2012 by the then 80-year-old multi-billionaire Frank Stronach. He had returned to his home country after 60 years in Canada where he founded one of the world’s largest automobile companies. When BZÖ did not want to receive funding that Stronach offered, he formed his own right-wing populist and EU-critical party. A few years after the election, however, several of the party’s parliamentarians had changed party, to the ÖVP. Team Stronach did not stand in the 2017 parliamentary elections.

Austria-Liberal Forum (Das Neue Österreich-Liberalen Forum, Neos) was also formed in 2012, by a mix of former OPP supporters, independent liberals and environmentalists who wanted to end the political “deadlock” with a new form of grassroots democracy. Neos is a liberal and EU-friendly party. At first it was only called Neos but merged in 2014 with another party, the Liberal Forum.

Green Party The Greens (Die Grünen) is represented in Parliament since 1986 and has increased its vote share in the last elections. The Greens took part in important negotiations with the government in the early 2010s, including on party financing. The party resigned from Parliament after the 2017 elections, but came in fourth place in the new 2019 election.

A distinguishing feature of the political system in Austria is the so-called social partnership (Sozialpartnerschaft). It is informal cooperation – it is not regulated by law – that gives the social partners a central role in political decision-making. The system contributes to political and economic stability and, not least, peace in the labor market. The workers are represented by two organizations: the union central organization ÖGB and by the Workers’ Chamber, both of which are close to SPÖ. Employers are represented by a Chamber of Commerce and a Farmers Chamber, both of which have close ties to ÖVP. Membership in the three chambers is compulsory for employees, entrepreneurs and farmers. Membership in ÖGB is voluntary (see also Labor Market). 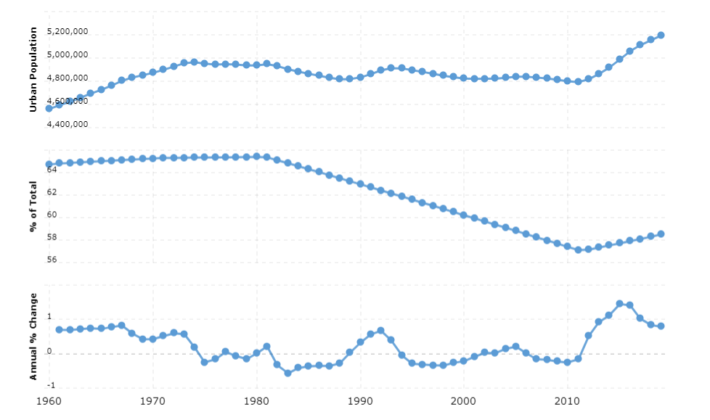