Short for BA by Abbreviationfinder, Bosnia and Herzegovina has a state of affairs that came to the fore in the bloody civil war of 1992–1995. The constitution is part of the peace settlement, the Dayton Agreement, and means that the country is a state with two autonomous parts: the Serb-dominated Republic of Srpska and the Bosnian-Croat Federation of Bosnia and Herzegovina. The two entities handle the majority of government functions while the central government is weak. Contradictions remain very strong and in practice Bosnia is still governed by a part of the international community.

The Bosnian state of affairs has been called the most complicated in the world. The construction of two entities means that there is president, parliament and government both at national level and in both regions. Decisions relating to foreign policy, fiscal policy and other general areas must be made at the national level, but most of the issues are handled by the entities.

In addition, Brčko, a district located on the border with Croatia in the north and dividing Republika Srpska in two halves. Brčko, whose status was established through international arbitration in 1999, is formally part of both entities but forms its own municipality with its own administration and is directly subordinate to the central authorities.

For just over 20 years after the war, Bosnia is largely an international protectorate – an area under the protection of another power. Bosnia is largely managed by the “High Representative” appointed by the Dayton Agreement to coordinate reconstruction. The High Representative has far-reaching powers to issue and withdraw laws, as well as to dismiss officials and politicians who are considered to hinder the peace process (see also Foreign Policy and Defense).

The constitution consolidates a division of the population into three “constituent” ethnic groups (see Population and languages). Apart from the fact that the two entities are based on the separation of the ethnic groups, the appointment of the head of state and the upper house of parliament is done according to ethnically defined quotas (see below). The European Court of Human Rights has found that the Constitution thus discriminates against other minority groups, but it has not yet led to a change in the law.

The board of directors both nationally and in the entities is semi-presidential. This means that the executive power is shared between the government and the head of state, which at national level consists of a three-person presidency council. In order to bring together governments, coalitions between parties that have fundamentally contradictory visions of the country’s future are required.

The three members of the Presidential Council are all elected simultaneously by direct majority elections, every four years. Voters in Republika Srpska choose a Serb for the presidency, while voters in the Federation choose a Bosniak and a Croat. The three rotate as chairman – and then serve as president – eight months at a time. A person can sit for a maximum of two terms in a row in the presidency. The Council is primarily responsible for foreign policy, submits a budget to Parliament and appoints the President of the Council of Ministers. This chairman, corresponding to the prime minister, in turn appoints other ministers in the government.

The laws are established by a parliament with two chambers: a lower house, the House of Representatives, and an upper house, the House of the People. The 42 members of the House of Representatives are elected in general elections every four years (at the same time as the presidential election). Two thirds of the seats are reserved for candidates from the Federation and one third for representatives from Republika Srpska. The 15 members of the People’s House are appointed indirectly: ten by the Parliament of the Federation and five by the Parliament of the Republika Srpska. The three people groups are guaranteed five places each in the upper house. Since the various groups are closely guarding their own interests, Parliament’s work is slow.

Local elections are held every four years, between the national and regional elections, which means that it is never more than two years until the next election. This means that politicians and parties are in a kind of constant electoral movement, which contributes to difficulties in reaching long-term solutions.

In the Federation, too, Parliament consists of two chambers. The Federation House of Representatives has 98 members appointed directly by voters every four years. The 58 members of the Federation People’s House are indirectly appointed by the Cantonal Legislative Assembly (see below). In the upper house, the members shall consist of 17 Bosniaks, 17 Croats, 17 Serbs and 7 “others”. The Federation Parliament appoints, for four years at a time, one federation president and two vice presidents; the three should be a Bosniak, a Serb and a Croat.

The federation is divided into ten fairly independent cantons, five of which are dominated by Bosniaks, three by Croats and two with mixed populations. The cantons and the 79 municipalities have their own, popularly elected parishes. The capital of the federation is Sarajevo, just like the nation’s.

In the Republic Srpska, Parliament, the National Assembly, has 83 members elected every four years. The National Assembly also appoints a People’s Council with 28 members: 8 each from the three dominant ethnic groups and 4 from other ethnic groups. The president is elected in general elections, as are legislative assemblies and mayors in the 63 municipalities. Banja Luka in the north serves as the capital of Republika Srpska. Until 1998, Parliament sat in Pale, a small town outside Sarajevo.

Partying is fragmented and new parties and alliances often arise. Most political parties have a distinct nationalist-ethnic character and are dominated by one of the three constituent ethnic groups. In many cases, it is difficult to tell where they are on a right-left scale. Some parties call themselves multi-ethnic and want to represent Bosnians of all origins, but even they tend to be dominated by some ethnic group.

The largest Bosnian nationalist party is the Democratic Action Party (Stranka Democratic Democratic Party, SDA). It was founded in 1990 by Alija Izetbegović, who was President of Bosnia in 1990-1996 and then was a member of the Presidential Council until 2000. The party is led by his son Bakir Izetbegović, who was a member of the Presidential Council from 2010 to 2018 and who is now the Speaker of Parliament.

For the Bosnian camp also counts the Alliance for a Better Future of BiH (Savez za bolju Buducnost BiH, SBB BiH or just SBB), founded in 2009 by media magnate fahrudin radončić and the Party for Bosnia-Herzegovina (Stranka za Bosnu in Hercegovinu, SBiH).

The largest Serbian party was for a long time the Serbian Democratic Party (Srpska Democratic stranka, SDS) formed by the Bosnian Serbs leader during the war, Radovan Karadžić. The Serbian nationalist SDS was bypassed in 2006 by the Alliance of the Leftist Independent Social Democrats (Savez nezavisnih socijaldemokrata, SNSD). The SNSD previously profiled itself as an EU-friendly party, but over time has become increasingly nationalistic and threatens to allow the Republic of Srpska to break out of Bosnia. The party was excluded from the Socialist International in 2012 because of its unforgivable nationalist rhetoric. SNSD was founded by Milorad Dodik, the party’s leader. Dodik was President of the Republic of Srpska from 2010 to 2018, when he was elected Serbian representative in the National Council of Presidents.

Croats also formed a nationalist party in 1990: the Croatian Democratic Union (Hrvatska democratic zajednica, HDZ ). It has strong ties to the Christian Democratic sister party in Croatia of the same name. The Bosnian Party was split in 2006 into two: HDZ BiH and HDZ 1990.

After an outbreak of the SDP, the Democratic Front (Democratic Front, DF) was formed in 2013. The new party also calls itself social democratic and multiethnic. The founder of DF, Željko Komšić, was the Croatian representative in the presidency of the Commons, and returned to the post 2018.

The Croatian parties advocate a new constitution where the Federation is divided into two autonomous parts, one Croatian and one Bosnian. 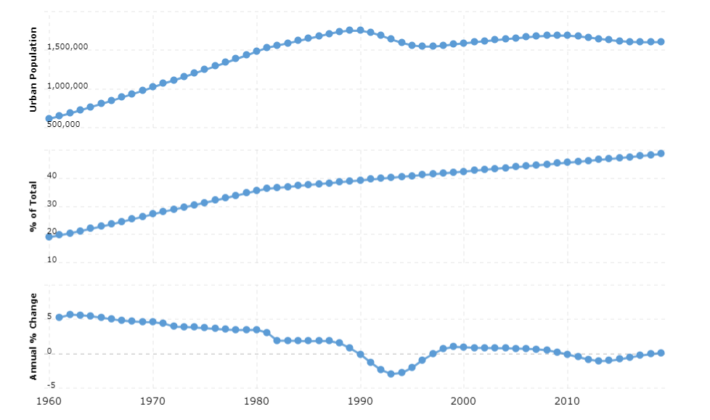