After 1989, Hungary used a thoroughly revised version of the communist constitution introduced in 1949. Only in 2012 was the country fully drafted by a democratically elected parliament. Short for HU by Abbreviationfinder, Hungary is today a parliamentary democracy – but the system gives parties in office a strong grip on both decision-making and appointments to important jobs.

Parliament (országgyűlés) is the legislative body and after amendments that became effective in the 2014 elections, it consists of 199 members: 106 are elected by majority vote in one-man constituencies and 93 in proportion based on party lists. Prior to the election, the constituencies had also been partially redone with increased elements of majority voting, while at the same time holding an electoral round instead of two. The changes to the electoral system are considered to have benefited the Fidesz government. To get into Parliament, a party must get at least five percent of the vote. The voting age is 18 years.

The president, elected for five years by Parliament, is the head of state and commander-in-chief. The role is mainly ceremonial, but the president can return laws for re-examination in parliament or to the Constitutional Court. It is also the President who proposes the Prime Minister, who must then be approved by a majority in Parliament.

The 2012 constitution received harsh criticism from the domestic opposition and the outside world. Among other things, it was criticized for failing to maintain the traditional balance of democracies between legislative, executive and judicial bodies and to weaken the independence of the judiciary. Some changes have been implemented later, but many problems remain according to human rights organizations and international organizations. For example, the ability of the Constitutional Court and the National Audit Office to monitor political power has been reduced. Particularly sharp criticism is directed at the fact that Prime Minister Viktor Orbán no longer needs to obtain Parliament’s approval to extend a state of emergency, and in the meantime can govern the country through decrees (see Calendar).

It has also been pointed out that in the event of a possible change of government in a forthcoming election, it will be extremely difficult for new holders of power to tear down the current constitution, as a two-thirds majority in Parliament is required for it. In addition, non-executive officials appointed by Fidesz can retain a decisive influence for many years over a number of important areas thanks to their long terms of office.

Hungarian politics is characterized by strong polarization and hostile attitudes between right and left. Citizens’ distrust of politicians is strong, partly because of scandals surrounding corruption and abuse of power.

By the middle of the 2010s, Fidesz, the large party on the right, had gained an increasingly dominant position in the party system while the opposition was divided. Fidesz – The Hungarian Citizens Alliance (Fidesz – Magyar Polgári Szövetség), founded in 1988 as the Youth Democratic Alliance (Fiatal Demokraták Szövetsége), grew out of the student movement and was then a left-liberal protest movement against communism. The party entered Parliament in the first free elections in 1990. After a bad election in 1994, Fidesz made a sharp turn to the right, causing many liberal members to jump off. Its current name took the party in 2003. Under the leadership of Viktor Orbán, Fidesz held the government in 1998–2002 and is leading the country since 2010. Under Orbán, the party has a nationalist and populist image.

Since the 2006 parliamentary election, Fidesz has been in an alliance with the Christian Democratic People’s Party (Kereszténydemokrata Néppárt, KDNP). The government parties were re-elected in the last election of 2018.

The largest party in the left opposition is the Hungarian Socialist Party (Magyar Szocialista Párt, MSZP), a successor to the Communist Party. It now has a social liberal orientation, that is, it advocates market economy but also state measures to create welfare. In the 2014 election, the MSZP was the largest party in the Left Alliance Unit (Összefogás), which included, among others, the Democratic coalition (Demokratikus Koalíció, DK), a party formed by former Prime Minister Ferenc Gyurcsány 2011. In the 2018 election, however, the MSZP and Democratic coalition were up itself.

In 2009, the Green and Liberal Party Politics may be different (Lehet Más a Politika, LMP), who joined Parliament in 2010. Four years later, a breakout group formed the new Party Dialogue for Hungary (Párbeszéd), which in the 2018 election formed an alliance with MSZP.

However, the main threat to Fidesz and Orban’s grip on power came during the second half of the 2010s not from the left parties but from the right-wing opposition. In 2003 the right-wing extremist and Hungarian nationalist party Jobbik – The Movement for a Better Hungary (Jobbik Magyarországért Mozgalom) was formed. The party was anti-Roman, anti-Semitic and homophobic and a strong opponent of economic globalization. In 2007, Jobbik created a “self-defense group” called the Hungarian Guard (Magyar Gárda), which, with uniforms and emblems that give associations to Nazism, raised strong concern among Jewish and Roma groups and even internationally. The Hungarian Guard was formally banned in 2009 but is still active with an appearance as a “nation-building” cultural association.

In order to compete with Fidesz’s increasingly strong right-wing nationalist profile, Jobbik has softened his ideology and become more room-clean. Jobbik is financed by the well-known media mogul Lajos Simicska, who was previously close friend of Orbán but who after a conflict between them became a political competitor. Jobbik became the third largest party in the 2009 and 2014 parliamentary elections and the second largest in the 2018 elections.

A new political force is the middle party Momentum, which was formed in 2017 by young activists who gathered names to stop the Hungarian Olympic application through a referendum. The referendum never ended, but the government withdrew the application. The party has a pro-European and liberal agenda. In the 2018 election, Momentum received just over 3 percent of the vote, which was not enough to get into Parliament. Things went better in the elections to the European Parliament in May 2019, when Momentum came in third place with just under 10 percent of the vote.

In the 2019 local elections, smaller parties formed alliances that were successful in several places against candidates for conservative Fidesz. As a result, the government quickly pushed through legislative changes to make alliance building more difficult (see Calendar). 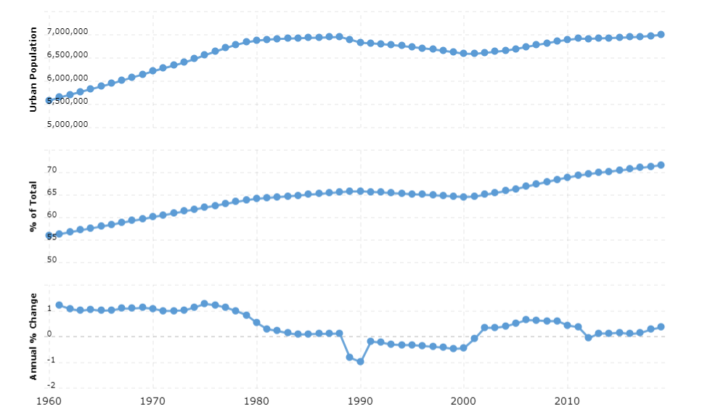