In 2006, Serbia became the last of the six sub-republics of the former Yugoslavia to proclaim its independence and in the same year a new constitution was adopted. It states that the country is a parliamentary republic. There are a large number of political parties but since 2012 Serbia has been ruled by nationalist parties.

When the Union of Serbia and Montenegro disbanded in June 2006 (see Modern History), Serbia became an independent state. In October of that year, the Serbs voted by a marginal margin for a proposal for a new constitution, which was then adopted by Parliament. The new constitution states that the Serbian state is based on European values. It also states that Vojvodina, but also Kosovo, are integral parts of Serbia.

The head of state is the president, who is elected in general elections for a term of five years. The President’s powers are relatively limited.

The Serbian Parliament (Narodna Skupština Srbije) has 250 members. General parliamentary elections are held every four years. At the request of the government, the president can dissolve parliament and announce new elections prematurely.

Just months before the 2020 elections, the threshold for parties to get seats in parliament was lowered, from 5 to 3 percent. This was done on the initiative of the dominant party SNS (see below), who said they wanted to increase citizens’ representation. But many judges were critical that the decision was made so shortly before an election and without dialogue, and saw it as a way for the government to try to create legitimacy around an election that large parts of the opposition chose to boycott (see Current policy). Parties that are ethnically based are exempted from the 3 percent barrier.

Short for SCG by Abbreviationfinder, Serbia is divided into 24 municipalities, of which 7 are located in the province of Vojvodina. The capital Belgrade has a special administrative status. Since negotiating an agreement with Kosovo in spring 2013 with Kosovo, whose independence is not recognized, Serbia has refrained from directly controlling the Serbian-dominated municipalities in northern Kosovo. The intention is for these to gain far-reaching self-government.

The major issues in Serbian politics have been how the country should relate to the EU and Kosovo. A large majority of politicians are (at least officially) opposed to recognition of Kosovo as an independent nation. Most are for membership in the EU but the issue has helped to split the parties. The issues are also interconnected, as the EU requires Serbia and Kosovo to establish good relations (and some EU members also want to see Serbian recognition of Kosovo).

The dominant political party has been the Serbian Progress Party since 2012 (Srpska Napredna Stranka, SNS). The party was founded in 2008 by Tomislav Nikolić as a breaker party from the SRS (see below). SNS won the 2012 election, but when Nikolić was simultaneously elected Serbian president, Deputy Party Leader Aleksandar Vučić took over the party leader post. Following SNS’s great successes in the spring 2014 elections, Vučić formed a new government. SNS also won the new election in 2016 and received more than half of the mandate, and thus its own majority. The following year, Vučić won the presidential election. SNS governs all major cities, and after the 2016 election also the province of Vojvodina. There are therefore those who warned that the party, and not least the popular Vučić, has gained too much power (see, among other things, Democracy and Rights andCurrent policy). The party is moderately nationalistic, that is to see Serbia as an EU member but at the same time calls for good contacts with Russia (see Foreign Policy and Defense).

The Socialist Party of Serbia (Socijalistička Partija Srbije, SPS) has been a member of all governments since 2008. It emerged once from the old Communist Party in Serbia and was led by Slobodan Milošević during his most powerful period, even after he was brought to the War Criminal Tribunal in The Hague. Following Milošević’s death in 2006, SPS’s new leadership modernized the party and brought Serbia closer to the EU. SPS has been cooperating with the SNS since the 2012 election. Party leader Ivica Dačić is the Deputy Prime Minister and Foreign Minister of the SNS-led government.

The strongest EU resistance has come from extremist nationalist, “Greater Serbian” and populist Serbian Radical Party (Srpska Radikalna Stranka, SRS) whose leader Vojislav Šešelj has long been detained in The Hague, accused of war crimes. SRS became the largest single party in the 2008 election, but weakened later that year when the more moderate deputy party leader Tomislav Nikolić broke out of the SRS and formed the SNS (see above). The party disappeared from Parliament in the 2012 election and many had figured it out. In the 2016 election, however, SRS made a comeback and came a little undefeated in third place. The fact that the party leader Vojislav Šešelj was acquitted by the Hague Court has given new impetus to the party. But when Šešelj ran in the 2017 presidential election, he received only 4.5 percent of the vote.

The great successes of the nationalist parties led to problems within the Democratic Party (Democratic Stranka, DS), which at the time President Boris Tadić was the largest party and dominated the relatively reform-friendly, liberal and EU-friendly coalition that ruled until 2012. DS was founded in the late 1980s of 2003, Zoran murdered Đin mörić (see Modern History). After the 2012 election loss, Tadić resigned as party leader and DS has subsequently changed leaders several times.

Before the 2014 elections, Tadić formed a new party which later changed its name to the Social Democratic Party (Social Democratic Stranka, SDS). It also received 6 percent of the vote in 2014 and in the 2016 election took over the 5 percent barrier in alliance with two other pro-European, liberal parties. SDS is one of several parties boycotting the 2020 election.

In parliament 2016 also came the new, pro-European, liberal opposition movement Now it is enough (Dosta je bilo) and the pro-Russian coalition between Serbia’s Democratic Party (Democratic Stranka Srbije, DSS) and national conservative and right-wing Christian Dveri (Srpski Pokret “Dveri “, Serbian Movement” Doors “). DSS was formed in the early 1990s as a breaker from DS. Both DSS and DS were part of the opposition of 18 parties, DOS, which overthrew Milošević from power in 2000 but inconvenienced the party leaders, Zoran Đinđić (DS) and Vojislav Koštunica (DSS), made the collaboration difficult. DSS has emerged as a conservative, nationalist party. In the 2014 elections, the barrier failed to reach the parliament and Koštunica resigned as party leader.

In September 2018, some 30 opposition groups, from left to far right, formally formed a new opposition bloc: Alliance for Serbia (Savez sa Srbiju, SZS). A driving force was the former mayor of Belgrade, Dragan Đilas. He previously belonged to DS, but in 2019 formed the Freedom and Justice Party (Stranka slobode in pravde, SSP). DS is also part of the alliance, which is mainly gathered around a pronounced opposition to the government and President Aleksandar Vučić in particular, and addresses what is perceived as an increasingly authoritarian regime. Alliance for Serbia boycott elections in June 2020 (see further Current policy). 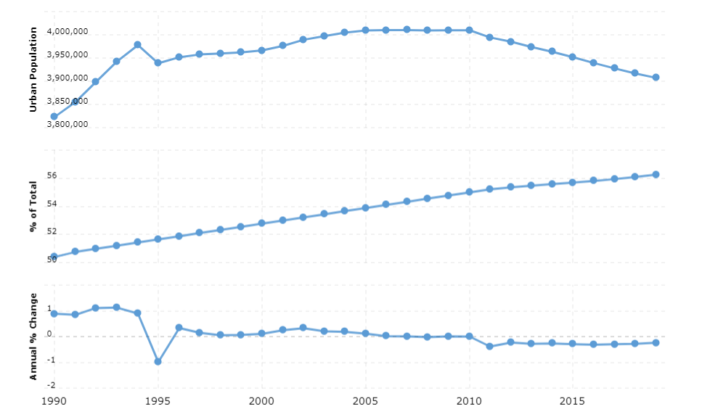